Formed in 1989, and with half a dozen studio albums to their name, the line-­up of the band has never changed, and neither has the collective desire to claim a key and colourful chapter in the annals of rock 'n' roll.

The single​ 'Th1rt3en or Nothing' will be followed by festival appearances right across Europe, paving the way for the release of the new album, '​Four By Four', at the end of summer. Then it's off to Japan to keep the party going...

Debut EP stirred up interest in 1991

In 1991, the self­-released debut EP, '​Something To Swallow', ​stirred up interest both at home and abroad, resulting in a first record deal then a debut album, 'Diesel And Power' (1994), that channelled the band's considerable rock 'n' roll instincts into a deliciously sleazy (tattooed) body of work. 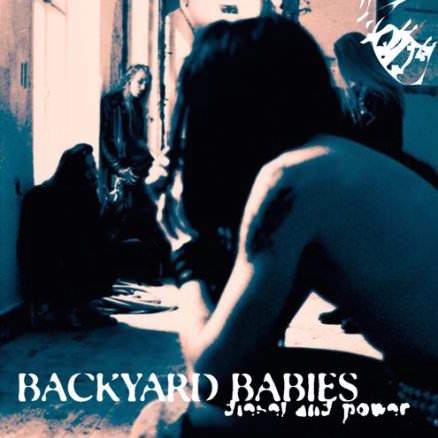 The cover of the Backyard Babies debut album, Diesel and Power.

It was in 1994 that the band's career effectively kicked into gear; this was when the four moved to Stockholm, embarking on a journey that would place them squarely (and spectacularly) on the world stage, sharing that stage with some of rock's most legendary names along the way...

With their popularity rising fast, the big break was just around the corner... 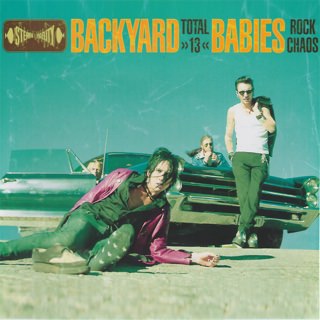 The cover of Total 13 was shot in Frihamnen, Stockholm

It reached gold status at home and picked up a Swedish Grammy, providing the ideal launch-­point for impressive worldwide sales plus a tour across the planet, from Tokyo through to LA.

Making Enemies topping the charts in 2001

The follow-­up album, '​Making Enemies Is Good' (2001), took the band's success to a new level, topping the Swedish charts and breaking the international rock scene via an extensive European tour as main support to A​C/DC.

Huge Success with Stockholm Syndrome And Minus Celsius in 2003

'Stockholm Syndrome', ​studio album Number 4, saw the 'M​inus Celsius' ​single lightin' a fire under rock radio stations across the globe, it charted Top 2, and as with its predecessor, it earned the troupe a gold award.

The video for "Minus Celsius" was recorded in Los Angeles by Dean Karr.

Album And Tour Before Break in 2010

In 2008, Backyard Babies entered the studio to record their self-titled and seemingly last album. After 20 years together, touring non-­stop and earning their reputation as a t​rue force of nature, they decided it was time for a break.

There was no talk of how long this break might last, but it was signalled by the photo­-book box­-set, '​Them XX', ​released in 2009, ​p​lus a 20 year anniversary tour that turned out to be their most successful e​ver.

The band has always put creative energy into producing special products – lovingly-­packaged vinyl, DVDs, books, etc... and the new album will keep that tradition alive, showing all of the attention­-to-­detail that fans have come to expect...

"We really feel that our time out will end up being a win­-win situation for both the band and our fans." continues Nicke Borg.

"The break has developed us individually as songwriters and musicians, and we've come up with what we feel is our strongest material to date."

"For the first time, we've had the chance to look back on our catalogue and get a firm grip on why our audience – and ourselves, for that matter – loves Backyard Babies so fucking much! So it's been a mixture of personal development and finding our way back to the band's essence, its energies..."

"It's tough to bang out explosive rock 'n' roll when you're being well fed... now we're hungry again!"